US Troops in Breach of Defence Act at Shannon 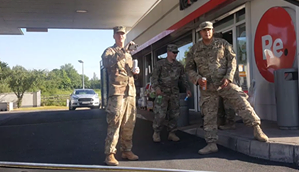 In accordance with the requirements of the Defence Act 1954, express permission was granted by the then Minister for Foreign Affairs in January 2003 to the US authorities to allow for their military personnel wear their uniforms in the transit areas of Irish airports, including Shannon airport.  Further permission must be sought for wearing of uniforms outside these areas. Where permission is granted, conditions under which uniforms may be worn are stipulated by my Department.

On 26 June 2018 these conditions were not strictly adhered to and my officials raised our concerns about this with the relevant Embassy on 27 June, emphasising the necessity for strict compliance with the criteria as laid down by my Department.  My Department has sought, and received, assurances that the Embassy is strengthening its measures to prevent any reoccurrence.

My Department receives requests from various States for the wearing of military uniforms for a variety of reasons- attendance at official meetings or functions, diplomatic events, seminars or courses. Where permission is granted, the applicable conditions and restrictions are specified and explained in detail.  Issues rarely arise.  If they do, my Department takes prompt action to ensure that the need for compliance is fully understood."

So, one day after we published the photograph the Department of Foreign Affairs was on to the US Embassy.

This isn't the first time the conditions have been breached. US troops are regularly seen in uniform outside the airport, and we suspect it is usually without permission. In other words the US military routinely ignores the conditions laid down by the Irish government for their use of Shannon Airport. And while they shouldn't be transiting through Ireland in the first place, the fact that they flagrantly ignore the conditions should be of grave concern to our political leaders, and to the authorities charged with ensuring the law is adhered to.

In anotherfollow-up, Aengus O'Snodaigh TD, Sinn Fein, asked the Minister for Foreign Affairs and Trade for the number of consents in writing he and his predecessors issued under the Defence Act 1954 to foreign soldiers entering or landing here in each year since 2003. In his reply the Minister  provided the numbers for 2013 to 29 June 2018, and not from 2003 as requested. The figures were as follows:

Finally, in answer to another parliamentary question from on July 3rd, the Minister of State at the Department of Defence, Paul Kehoe, confirmed that the observance of the conditions relating to permission in relation to the wearing of uniforms is a matter which is dealt with through the Department of Foreign Affairs and Trade.

So, once again the buck stops with Simon Coveney TD. Will he do anything to address the misuse of Shannon Airport and its surrounding areas by the US military? We fear not - at least not without a lot more work from us and other like-minded groups.