Military Use Of Shannon Airport

Shannon Airport has been used by the US military on their way to/from wars in Iraq, Afghanistan and elsewhere for over a decade and a half. It has also operated as a stopover point for CIA rendition planes. All this came about without the permission of the Irish people. As a result we are all complicit in gross violations of human rights, the killing of innocent civilians, and unending cycles of suffering for millions of people.

Since 2002 close to 3 million US troops have gone through Shannon Airport. The numbers were at their highest in 2005 when Shannon facilitated 341,000 soldiers on their way to war. The figures for 2019 were less than half of that (86,653). However this decrease does not in any way diminish Ireland's complicity in war.

US Troops Passing Through Shannon Since 2002

Most of the US troops passing through Shannon are on board flights that are classified as "civilian". These are governed by the 1944 Convention on International Civil Aviation (known as the Chicago Convention). Most but not all of the troop carriers are operated by Omni Air International. The Irish government has acknowledged that these aircraft are permitted to carry weapons on board.

The Chicago Convention states that "no munitions of war may be carried in or above the territory of another State in aircraft engaged in international navigation, except by permission of such State". This only covers the so-called "civilian" aircraft like Omni Air International's that are carrying troops and cargo. In Ireland civilian flights carrying weapons must be given prior permission to overfly or land by the Minister for Transport. The vast majority of these requests are from aircraft chartered by the US military.

The number of exemptions for the carriage of munitions of war on civil aircraft are as follows.

The landings at Shannon are the "civilian" aircraft, operated mostly by Omni Air International, with the personal weapons of US troops on board.

Civil Air Ireland publishes additional information pertaining to the number of applications received for an exemption for the carriage of munitions of war on civil aircraft, including the number of requests granted, refused and cancelled. These are available on the Department of Transport, Tourism and Sport (DTTAS) website here.

For more information on the carriage of munitions of war on civil aircraft see the DTTAS website here.

Destinations for Troop Transiting Through Shannon

A report published by the Irish Times in June 2019 calculated that the US military accounted for at least 93% of the flights requesting permits to carry munitions that passed through Irish airports or airspace between 2014 and 2018 inclusive. These involved troops going to 39 different countries. Most of the troops were either returning to the US (385,353) from a variety of locations around the world, or travelling to Germany (184,435) where the US has its European military headquarters. In that time period, a large number of US troops also travelled to Kuwait (133,762), Jordan (2,212), the UAE (2,786) and Bahrain (2,186). All these destinations are part of the US-backed and Saudi-led coalition involved in the war in Yemen. The US also flew 1,798 troops to its military base in Djibouti, which is separated from Yemen by the Red Sea and is seen as a significant location on the route to the Suez Canal.

US Military Flights Through Shannon

In addition to the US troop carrier flights, aircraft operated directly by the US Air Force and Navy also land at Shannon. Quite extraordinarily, the Irish government claims that these aircraft are all completely unarmed, carrying no arms, ammunition or explosives and are part of military exercises or operations. This is desipte the fact that in September 2013 a Hercules C-130 with a 30mm cannon mounted on the side was photographed at Shannon. 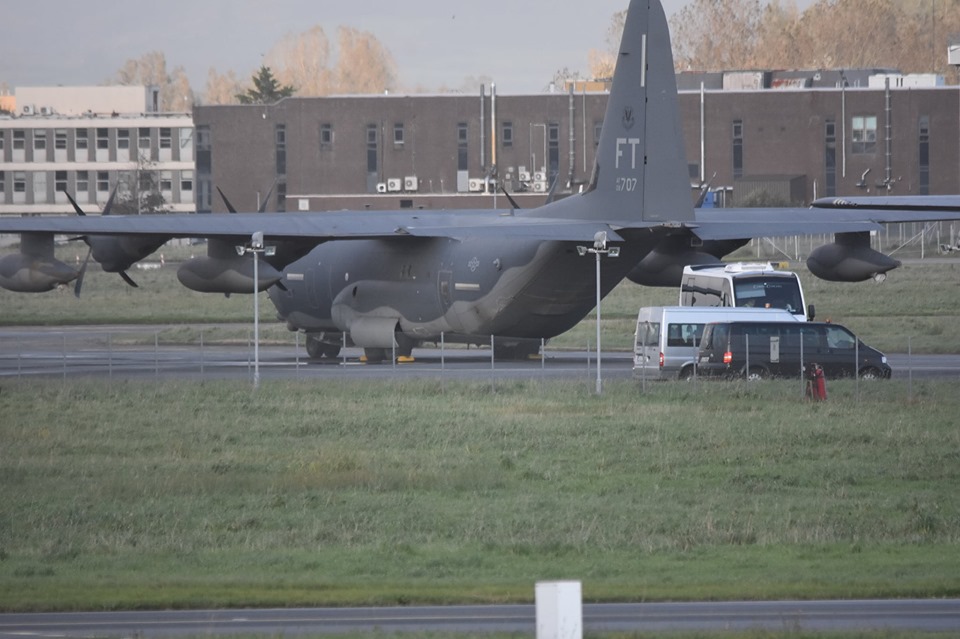 For a foreign military aircraft to land at an Irish airport or even to pass through Irish airspace, permission must be granted by the Minister for Foreign Affairs. According to successive Ministers for Foreign Affairs permission is subject to "strict conditions". Most recently (November 2020) the Minister Simon Coveney said that "these routinely include stipulations that the aircraft must be unarmed, carry no arms, ammunition or explosives and must not engage in intelligence gathering, and that the flights in question must not form part of military exercises or operations. Overflights by US military aircraft are permitted without prior notification, where the aircraft are unarmed, carry only cargo and passengers and comply with navigational requirements".

We are awaiting data from the Department of Foteign Affairs for the years before 2015.

Its difficult to believe that none of these military aircraft had any weapons on board or were not involved in military operations or exercises.

Recommended reading: The Militarisation of Ireland's Foreign and Defence Policy:
A Decade of Betrayal and the Challenge of Renewal (Afri, 2007)

Shannonwatch routinely logs military-related aircraft landing at Shannon. Not all landings have been recorded, but details of those that have can be made available on request. Contact us for more details.