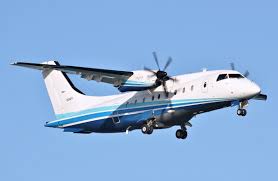 Earlier this week we wrote about a US Air Force, Special Operations Command Dornier C-146A 'Wolfhound' aircraft registration 97-3093 that arrived in Shannon on 8th February from the USA, spent over 17 hours at the airport, and took off on the morning of 9th February.

"The landing in question was by a US military aircraft, with seven crew and no passengers on board. It had sought and received prior diplomatic clearance to land subject to our routine stipulations, including that it did not carry arms or ammunition. The US authorities have confirmed that this condition was met.

In terms of public health measures, I note that Statutory Instrument 44/2021 was the applicable regulation on that date and that, as set out in that Instrument, exempted travellers include "an aircraft pilot, other aircrew, maritime master or maritime crew who arrives in the State in the course of performing his or her duties.”

The Department of Foreign Affairs is not involved in and does not comment on accommodation arrangements for US military or official personnel transiting through Shannon."

The claim that there were seven crew members on board is difficult to believe. A small plane like this typically has a max crew of three, including two pilots and a loadmaster. If its carrying a spare crew then they should be classed as passengers while they are not actually crewing the plane, i.e. not performing their duties as crew.

Under Statutory Instrument 44/2021 which outlines temporary Covid-19 restrictions, aircraft pilots and other aircrew are "exempted travellers" from the regulations that on arrival in the State they provide evidence confirming that (a) they has been subject to a RT-PCR test, (b) such test was administered to the person no more than 72 hours before the person arrives in the State, and (c) Covid-19 was not detected at the time of taking the test.

It would appear that this regulation is now being misused to allow US military personnel come and go through Shannon.

We've also noted that this aircraft has had an interesting set of flights before and after arriving in Shannon.

It flew out of Eglin Air Base in Florida on 4th Feb, had what appear to be refuelling stops in TF Green MA, Bangor MA, and an overnight in Keflavik in Iceland, before arriving in Shannon on 8th Feb.

With so many overnights, its unlikely that it was carrying a spare crew.

After Shannon the plane went on to Stuttgart, Germany; then Chania,Crete, then Cairo, and on to Khartoum in Sudan on 10th Feb.

We don't know what it did until 16th Feb when it took off from Nairobi, Kenya heading towards Somalia.

And no details of its whereabouts since then are available.

The government are now going to great lengths to defend the indefensible. A breach of the Covid-19 regulations by the US military at Shannon on Jan 25th was pointed out (a US Navy plane) - they called this an error. Another breach on 28th Jan was pointed out (a troop carrier) - they pretended it didn't happen, or was really an internal flight because the plane took off and landed again. And now that a third breach has been pointed out, they're claiming everyone on the plane was crew.

These are the lengths our government is going to in its support for US military aggression. Risking public health and making a mockery of our neutrality.