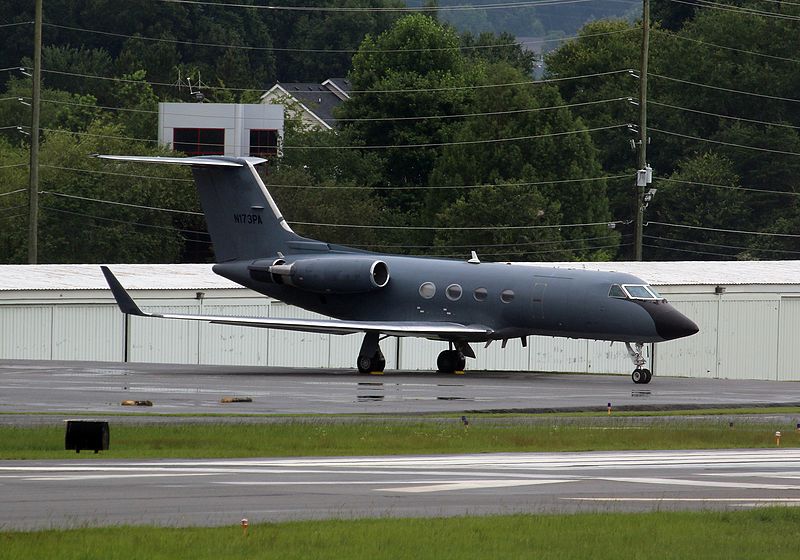 At least three aircraft with links to companies that operated rendition flights for the CIA passed through Shannon Airport over the past few weeks. While we have no evidence to indicate that they are involved in renditions now, recent history tells us that its important to question their presence at Shannon and to get explanations about their activities.

On April 13th a Lockheed L-100 / C-130 Hercules, registration N2679C, arrived from Eglin Air Base in Florida and travelled on to Yerevan in Armenia. See our report here. It is operated by Tepper Aviation.

A Gulfstream 3, registration N173PA, arrived at Shannon on Thursday April 16th from Washington Dulles and travelled on to Crete, Addis Abba (Ethiopia) and Khartoum (Sudan). It returned though Shannon again on April 18th, on its way to Gander International Airport in Newfoundland. N173PA was also in Shannon on April 5th; it arived at 7.48am and left at 9.43am, also on its way to Gander. Photograph shows N173PA at Cartersville, July 2015 (from Wikimedia Commons).

On both occasions N173PA used the call sign LN173PA flying in and out of Shannon.

Another Gulfstream 3, registration N197PA passed through Shannon on April 1st.It arrived at 2.19am and left just over an hour later at 3.28am.

Both Tepper Aviation and Phoenix Air are identified by The Rendition Project and others as companies which have operated aircraft linked to the renditions programme.

Another Phoenix Air plane that we suspected of being involved in renditions over a decade ago, N54PA, passed over Ireland on April 11th.

Some of these flights may be involved in medical evacuation of people affected by Covid-19. But given the involvement of the companies operating these aircraft in renditions, it is vital that we get full disclosure of their business.

According to an online report from 2014, N173PA can be used to "pack two patients that are infected with one of the world's deadliest viruses" and fly them with healthy care takers and pilots for 12 hours and "not get almost everyone infected in the process". That was in the days of the Ebola crisis.

We are mindful of the fact that in 2007 our activists highlighted a CIA controlled Learjet registration N71PG being refuelled at Shannon before making a hasty exit within the hour. According to an indymedia report from the time:

"Unlike the two other CIA planes recently refuelled at Shannon, Gulfstream N476LC refuelled on 30 Oct 07 and Gulfstream N478GS refuelled on 30 Nov 07, both of which were notorious torture rendition planes, we know very little about N71PG so far. ... We should remember that when the now infamous N379P, known as the Guantanamo Express was first seen at Shannon and logged on indymedia by Tim Hourigan, we were not even aware of the CIA torture rendition programme. Such murky and gross violations of human rights are by their very nature very difficult to expose."

Less than six months later Amnesty International were calling for an end to IS rendition flights through Shannon.

Given the history of Tepper Aviation and Phoenix Air's involvement in kidnapping and torture (rendition), and Shannon's use as a logistical hub for rendition flights we need to know what these planes were doing at Shannon.

In 2014 an investigator who worked with Reprieve gathering information on the rendition programme said he interviewed pilots who told him that the oversight at Shannon for what was known as government planes or aircraft on “a government mission” was “extremely lax.” (see Irish Times report).

We should learn from that. Covid-19 cannot now be used as an excuse to once again let US government-linked planes go through Shannon without oversight or inspection.

We need to know what and who is on board. Full inspection and disclosure by the Irish authorities is imperative.