Recent discussions about the safety or otherwise of having the US military flying in and out of Shannon Airport gave us reason to recall an incident in March 2008 in which a Murray Air aircraft was involved in an emergency landing at Shannon. This was after it was seen flying over Askeaton, which is across the River Shannon estuary from the airport, with flames coming from one of its engines. Residents of the County Limerick town described their windows rattling and houses shaking as the cargo plane flew low over a housing estate in the town.

At the time there was a discussion about the incident on the RTE Radio's Joe Duffy Show. During the discussion Tracey Bell, Director of Administration for Murray Air, admitted that explosives had been brought through Shannon by the airline on previous occasions. She was asked about this by the presenter Joe Duffy:

Tracey Bell - I can confirm that, yes sir.

Joe Duffy - Have you carried explosives through Shannon? 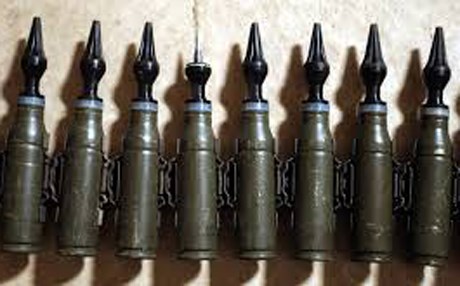 Edward Horgan of Shannonwatch who contacted the programme and spoke on air asked if Murray Air had carried depleted uranium (DU) through Shannon. Ms Bell said she didn't know, but when pressed confirmed that their license allowed for them to carry this lethal radioactive substance.

The consequence of it not being declared to the Irish authorities, or of the Department of Transport, Tourism and Sport giving permission for it to be taken through Shannon are frightening. What if a plane carrying DU was involved in an accident at Shannon, or as it was taking off?

The consequence of using DU munitions are even more devastating in war zones. We know that the US used them in the Gulf and Iraq Wars. A 2006 report by Dr. Souad N. Al-Azzawi on Harvard University's website confirms this:

"Depleted Uranium (DU) weaponry has been used against Iraq for the first time in the history of recent wars. The magnitude of the complications and damage related to the use of such radioactive and toxic weapons on the environment and the human population mostly results from the intended concealment, denial and misleading information released by the Pentagon about the quantities, characteristics and the area's in Iraq, in which these weapons have been used."

In an interview with Al Jazeera reporter Dahr Jamail, Democracy Now! reported that the US invasion has left behind a legacy of cancer and birth defects suspected of being caused by their extensive use of depleted uranium and white phosphorus. This is not surprising, given that they fired hundreds of thousands of rounds of DU munitions there. Democracy Now! wrote:

"Noting the birth defects in the Iraqi city of Fallujah, Jamail says: 'They're extremely hard to bear witness to. But it's something that we all need to pay attention to ... What this has generated is, from 2004 up to this day, we are seeing a rate of congenital malformations in the city of Fallujah that has surpassed even that in the wake of the Japanese cities of Hiroshima and Nagasaki that nuclear bombs were dropped on at the end of World War II.'"

The US has also used DU in Syria, for example in two high-profile raids on oil trucks in late 2015. These air assaults were the first confirmed use of this armament since the 2003 Iraq invasion.

Because of its high density, DU can also be used in tank armor, sandwiched between sheets of steel armor plate.

Murray Air's Tracey Bell confirmed that the airline had a license to transport DU. They and other carriers may well have taken it through Shannon with or without the knowledge of the Irish governnment or the authorities. The people charged with ensuring the safety and security of Shannon refuse to search US military and military contracted planes likely to be carrying DU. Instead they follow orders from a government that relies on worthless diplomatic assurances from the US authorities. These "assurances" state that they not taking hazardous and lethal material like DU through Shannon. And the Irish government take them at face value.

Its unlikely that the US authorities would tell the Irish government if they were taking DU through Shannon. If they are lying, it presents a very grave rish to people in places like Askeaton that the military and military contracted planes pass over as they are taking off and landing. And it makes Shannon Airport a very dangerous place to work in or travel through.