On 31st October activists Dan Dowling and Colm Roddy both appeared, yet again, at Ennis Court in relation to their peace actions. The cases were 'for mention' only, so nothing of note took place. Afterwards Dan sat with long-time activist Colm and discussed his activism, war and more. Here's a transcript of the conversation. 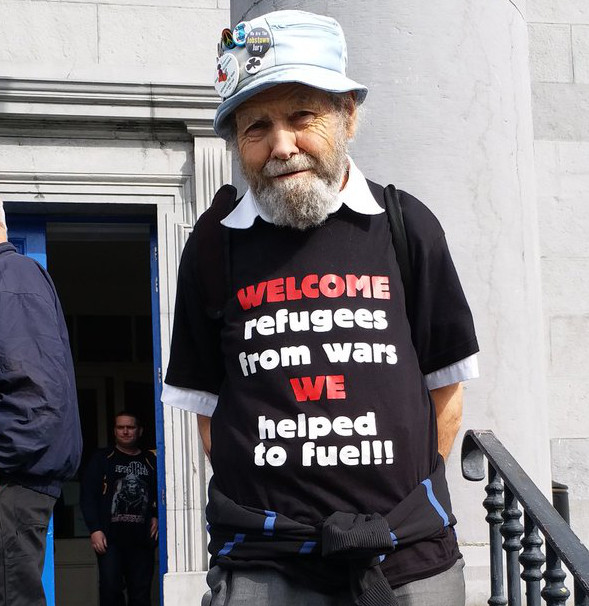 D: I saw a clip last night Colm, Ronald Regan's visit to Ireland, he arrived in a school and the children were dressed up in báníns for him. Ireland gave away her gas and fish for nothing, her children to emigration, our neutrality, recently our data. Is there any other country though that kowtows this much- to the yanks in particular?

C: Ireland's like the 51st state, after 9-11 we were the only country that held a national day of mourning. I was in town and every shop and institute was closed down. It was a more excessive reaction than the USA I think. And the rendition flights, our government accepted the word of the lying USA with no effort made to ensure there were no prisoners on board.

D:The age of the protesters and their profile, it is predominantly older people, the world over. What's wrong with my generation? I asked this a few times, the answers that came back were today's peace movement is remnants of the anti-draft movement, or anti-apartheid, in Ireland there were issues with the peace movement in Belfast, but what's happening with my generation?

C: Education now is a kind of mental slavery. There's a stoic acceptance of state authority, people don't realise individuals have human rights. Last week I met with TV3 and a company called side line productions. Fundamentally I believe everyone has equal rights and that's where I'm coming from.

D: What did you make of court today?

C: Today was meaningless. Normally things are good. The registrar was too quick, the judge is too interested in call overs, giving you a date to appear again, and it's all about getting people in and out. The judge didn't let me speak, it was like I didn't exist, you saw that yourself. He assumed I had representation.

D: Why do you defend yourself in court?

C: I defend myself but I take advice from my McKenzie friend. With the legal profession...I used believe in the political system of elected democracy and representatives. I used be Labour and then the Greens. But around fifteen years ago I found elected reps to be careerist - they have their own personal agendas and careers in mind. The claim to stand up against abuses at Shannon, but when it becomes inconvenient, for their career, like the motorway through Tara.... With legal representatives it's the same thing maybe. It depends if something is injurious to their career. I've been in the district court eight times, there is an unspoken protocol between judges and legal team, don't rock the boat too much, well it's like that with an elected rep because you hand over your voice.

D: You told me Colm you don't go online, how do you stay informed?

C: I go into shops in Dublin and read the newspapers, and I also use word of mouth.

C: That's a complex situation. You have Soviets on one side and fascists on the other, I remember Crimea was seized and there were protests and I honestly avoided them, Syria is similar, it isn't black and white.

D: You are a well-known as a protestor in Ireland Colm, what have you learned from protesting?

C: Protest works when its mass mobilisation, and its persistent like Irish Water. Small protests generally won't work unless something different happens, and you can impress on the public sufficiently the justice of your case, but that's almost impossible with our media, but it lets the anger out.

D: There was a case just last week Colm, two men in England were found not guilty, and they had broken into BAE. One guy was on Al-Jazeera and had been over to the UN as a guest of Yemen, they attempted to damage planes, following on from the ploughshares movement who damaged hawk helicopters being sent to Indonesia twenty years ago. They raised twelve thousand pounds crowd funding to give to their solicitors who got them not guilty verdicts. I remember inviting John Lannon to Tralee to speak, and he said that if the Americans were put out of one country it would send a message to other countries that they could do the likewise. That's been my motivation. Anyway this case in England, what do you think it achieved?

C: I don't know anything about this case. It was a protest, Shannon was my first direct action, I hadn't been arrested before that. And Ed was on the front page of The Clare Champion last month arguing his bail conditions, it was front page news, I hadn't seen that before. And Chelsea Manning when she released the videos, that made people all over the world realise what was being committed by The United States Military.

D: What can you tell me about Fr. Daniel Berrigan Colm?

C: He was a man of utmost integrity and courage he spent four years in prison for trying to stop the United States massacres.. You need enormous personal resources, courage, deep insight and you must be prepared to meet harassment and prison. You saw that journalist in Malta, who was killed for bringing the truth to light.

D: In 2003 there were 100,000 people protesting the Iraq war in Ireland now there are a handful. I remember being perplexed looking at tiny crowds in Shannon and thinking why aren't there more people, this doesn't make sense to me. So what happened to cause this collapse in numbers?

C: The political parties, all of them, decided to have a talking protest in Dublin, they all told people not to protest at Shannon and to stay in Dublin. That's what happened. People squirm at direct now a bit.

D: My last question, how can you find inner peace in an unequal world, surely nobody can be happy with things as they are? I'd be ashamed if I had found inner peace and the world was in turmoil.

C: I meditate a bit, I was raised Catholic I'd go to mass the odd time, but meditating makes me a better peace activist more focused, because I have to protest to get the anger out.

I was in Ethiopia, with my wife for three years, and when I got back, Charlie Haughey was cutting foreign aid, I petitioned him to stop it to not cut the aid, that's how I got involved in this. I studied engineering, and was the only one who got onto a postgraduate course, back in the fifties and sixties there might only be one postgrad candidate, studying reinforced concrete, seeing how it stood up to pressures, if it'd crack. But I found out who was funding it, the US Military! I was so glad I wasn't on the course anymore, I dropped out, they wanted to make improve their missiles, bunker busters, to shatter concrete, they might have been designing bomb shelters but I doubt it.

D: I had that problem with my studies too, when I was working, one job I had I was updating old software, and I found it was for East Afritac who were the IMF, this was at the CSO, and I left that job, that's when the IMF were in Ireland.

C: The lack of value for human life, I remember the purge in Turkey, reading about teachers and officials, what hit home for me was the Boston bombing, three people and it was front page news.

D: There was a clip I saw on last night, about Lesvos, there was a ferry skipper from Rathlin Island, Michael Cecil, and he said if six people drowned off the coast of Antrim or Dublin it would be front page news, but in the Mediterranean it was happening all the time.