Another Day in Court for the Shannon Four (Peace Activists) 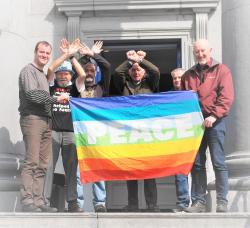 The other two, Dan Dowling and Edward Horgan, embarked on a similar communicative protest about a year later on 25th April 2017. There were two US Navy C 40 warplanes at the Shannon Airport on the night in question. Once again security was so effective that these two peace activists got right up as far as the two aircraft. It is still unknown how they entered the airport. One suggestion was that they may have parachuted in, given Horgan's training as a paratrooper!!! They are charged with the "heinous" crime of allegedly writing some graffiti on one of the aircraft, and trespass. Uniquely in the history of law, they are now before two separate courts for the same incident, before the lower District Court for the Trespass charge, and before the higher Circuit Court for trial by Jury on the criminal damage charge, even though a Detective Sergeant gave evidence that the alleged graffiti damage was "of no monitory value".

The hearing was to deal with the four defendants' submission that their trial should be transferred from Co Clare Circuit Court to Dublin Circuit because it would be "manifestly unjust" to try them by Jury in Co Clare. Dave and Dan were represented by a solicitor and barrister and Colm and Edward represented themselves. Judge Keyes reserved his decision, so there will be another day in court to hear whether the trails will eventually be held in Co Clare or in Dublin.

When will the trial or the trials actually take place? Who knows? it will likely be months away yet, and possibly even next year. The wheels of justice for the Shannon Four certainly turn slowly.