The decision by the Irish Government in 2017 to join the EU's permanent structured military co-operation (PESCO) was a body blow to advocates of Irish neutrality and opponents of imperialist wars of aggression. There were only three EU countries who opted out: the United Kingdom, Denmark and Malta. The United Kingdom is in the process of leaving the EU, so their opt-out was inevitable; Denmark has a Protocol that excludes it from EU militarisation, but they are members of NATO, so are not a threat to the overall EU-NATO axis. This leaves Malta, with a population of just 0.08% of the EU total, as the sole genuine opponent of the EU-NATO axis.

In this paper from the Research Department of the Peace and Neutrality Alliance (PANA) the history, legal context and current prospects of Malta' s neutrality, and what Ireland can learn from it, are outlined. 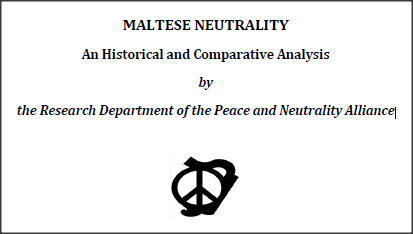 As the paper says, neutrality was enshrined in the Maltese constitution in 1987 after a referendum approving the following amendment:

Malta is a neutral state actively pursuing peace, security and social progress among all nations by adhering to a policy of non-alignment and refusing to participate in any military alliance. Such a status will, in particular, imply that:

(a) no foreign military base will be permitted on Maltese territory;

(b) no military facilities in Malta will be allowed to be used by any foreign forces except at the request of the Government of Malta, and only in the following cases:

(i) in the exercise of the inherent right of self-defence in the event of any armed violation of the area over which the Republic of Malta has sovereignty, or in pursuance of measures or actions decided by the Security Council of the United Nations; or

(ii) whenever there exists a threat to the sovereignty, independence, neutrality,unity or territorial integrity of the Republic of Malta;

(c) except as aforesaid, no other facilities in Malta will be allowed to be used in such manner or extent as will amount to the presence in Malta of a concentration of foreign forces;

(e) the shipyards of the Republic of Malta will be used for civil commercial purposes, but may also be used, within reasonable limits of time and quantity, for the repair of military vessels which have been put in a state of non-combat or for the construction of vessels; and in accordance with the principles of non-alignment the said shipyards will be denied to the military vessels of the two superpowers

The analysis of Malta shows that it is entirely possible for a small country to maintain a neutral and non-aligned stance and the role of bilateral defence treaties in the history of Malta's neutrality is particularly important in demonstating how a neutral state can have its defence and international security needs met outside a collective military alliance. Ireland's circumstances differ in some respects from Malta's - for example its geographic location. And in the thirty years since Malta's constitutional referendum, much has changed in terms of global geopolitics and the systematic failure of the UN Security Council to effectively maintain international peace and security. Nonetheless by examining the constitutional provisions of other neutral countries like Malta, Austria, Switzerland, Finland and Costa Rica, Ireland can learn a lot about how to end our ever-increasing participation in war.

We encourage you to read this paper, and to contact us or PANA if you would like to get involved in the campaign to reinstate Ireland's neutrality in 2018.

Link to Maltese Neutrality: A Historical and Comparative Analysis.